By: Craig H. Zalvan, MD, FACS
Chief of Otolaryngology and Medical Director
The Institute for Voice and Swallowing Disorders

66 year old male presents with diagnosis of GERD and asthma for chronic cough. He reports being well until 5 years ago when he had a severe URI, symptoms of which resolved, except for a chronic cough. Additional symptoms of ongoing waterbrash, throat clearing, and globus sensation; a tickle sensation in the throat followed by spasms of coughing associated with bouts of “wheezing,” described as a high pitch sound when breathing inward. He also reports his eyes tearing, rhinorrhea, and vocal strain with occasional bouts of nausea. Cold air and talking trigger coughing episodes.

Prior treatment included multiple courses of antibiotics, steroids, and allergy medications with no change in symptoms. A GI put him on twice daily PPI therapy that did seem to decrease coughing at night but not during the day. ENT evaluation was reported as normal. Pulmonology evaluation demonstrated normal PFT, yet diagnosis was “cough variant asthma.” Patient was placed on an inhaled steroid and bronchodilator (which at times triggered coughing) with no significant improvement. CT of the sinus, CXR, CT of the chest were all WNL. His initial Reflux Symptom Index, RSI=36; initial Cough Symptom Index, CSI=32.

Oropharyngeal pH testing was ordered given the chronicity of his symptoms and lack of response to most medications. Testing was performed while on PPI therapy, as cessation of the medications resulted in significantly increased burning and coughing at night. 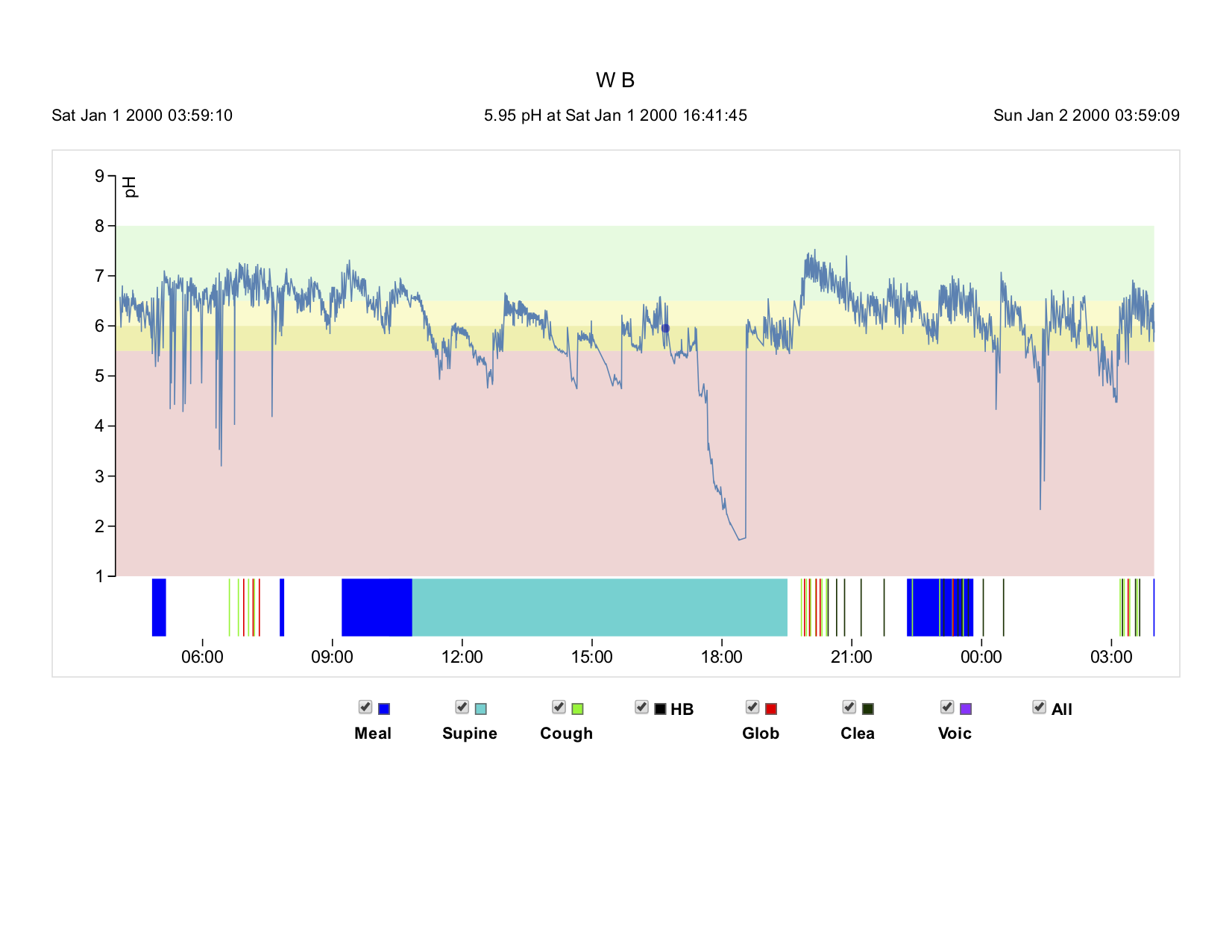 Results of the oropharyngeal pH testing revealed an interesting pattern of LPR followed by coughing episodes. There were 85 events < pH 5.5 with 6 concurrent coughing spasms; remaining coughing spasms occurred immediately after a reflux event. Overall there was over 4.5 hours with pH<5.5 (the majority of time when supine). Ryan score Upright=130 (Nl<9.41)1

Given the close association with his initial URI, a diagnosis of a post-viral neurogenic chronic cough with post-viral LPR exacerbation causing the night-time coughing and acting as a day-time trigger.

Laryngopharyngeal reflux disease (LPRD) represents a spectrum of symptoms affecting the upper aerodigestive tract, including: throat clearing, globus sensation, dysphagia, waterbrash, hoarseness, and chronic cough. LPR is thought to be caused by exposure of the laryngopharyngeal tissues to acid in the presence of pepsin, with resulting inflammation.

Diagnosis is typically based on history and physical examination with oropharyngeal pH testing utilized for recalcitrant symptoms, confounding factors, and diagnostic dilemmas.

Treatment is controversial and has historically utilized proton pump inhibitors (PPI), despite questionable potential efficacy2 and negative side effects including: increased rates of heart attack, dementia, and overall rates of death for long term use3. Over 13 billion dollars4 are spent yearly in attempt to treat this disease, primarily due to the cost of drug utilization. Recent evidence suggests that a mostly plant based, Mediterranean style diet, with the use of alkaline water, can significantly control this disease as well, if not better, than PPI5.

Chronic cough is a diagnostic dilemma resulting in significant expenditure of time, money, and resources. In the otolaryngology world, the causes of chronic cough can be broken down into four main categories: sinus, pulmonary, reflux-related, and intrinsic to the larynx.

Sinus: This patient had prior treatment for sinus disease and had a normal sinus CT. Sinus disease can certainly cause coughing from increased volume of nasal drainage of mucus, allergic mucin, and pus; however, should be associated with other symptoms of headache, fever, facial pain, pressure, sneezing, rhinorrhea, and malaise as well as physical findings on endoscopy demonstrating drainage of thick mucus, pus, inflammatory polyps, and/or bleeding. The addition of CT scanning of the sinus would also demonstrate significant abnormalities suggesting the sinuses as the cause.

The pulmonary workup was completely normal despite being labeled as “cough-variant asthma” and he had no response to multiple inhalers. The addition of a normal CT of the chest, CXR, and PFT sheds significant doubt on the diagnosis of “cough-variant asthma”. Cough variant asthma does exist as a real entity: chronic cough with high sputum eosinophilia, reversible airway disease, and response to inhaled steroids/bronchodilators. Nearly all of the chronic cough patients seen in the laryngology practice for chronic cough do not fit into this criteria. Neurogenic cough is far more common and likely represents the vast majority of cough variant asthma patients6, typically consisting of chronic cough preceded by a tickle sensation followed by coughing spasms often associated with epiphora, rhinorrhea, vocal strain, and nausea. The cough is often triggered by talking, laughing, eating, drinking, cold air, and odors. These spasms of coughing can be accompanied by bouts of inspiratory stridor, often misdiagnosed as “wheezing” further propagating the false diagnosis of asthma. Treatment in our clinic is first based on trigger reduction: saline irrigations and topical steroids/antihistamines to decrease and thin the basal rate of mucus from the sinuses, often upwards of 1L or more.

Reflux-related: LPR represents another potential trigger and our data suggest a dietary approach using a mostly plant based, Mediterranean style diet of fruits, vegetables, grains, and nuts with alkaline water decreases LPR and removes the potential trigger effect. In addition to treating reflux, our diet approach helps protect against diabetes, stroke, heart disease, and many cancers7. Our results* demonstrate upwards of 70% of people experience a more than 50% reduction in coughing using this approach alone, without medications†. Lastly, LPR itself can be a cause of chronic coughing, often with night-time awakening as one of the symptoms and treatment is mostly diet based.

Trigger reduction therapy was initiated: nasal saline irrigation and nasal antihistamine/steroid combination sprays to decrease and thin the basal rate and consistency of nasal secretions. LPR was treated using a plant based, Mediterranean style diet of 90-95% fruits, vegetables, grains, and nuts; and alkaline water (pH>8.0). Patient’s PPI’s were reduced to a single evening dose. Within 1 week he reported substantial improvement with his daytime coughing and complete cessation of coughing while sleeping. He lost 6 pounds and was instructed to taper off the PPI. By his next visit 6 weeks later, he had lost a total of 10 pounds and his coughing during the day also had improved greatly. His follow-up RSI=8 and his CSI=6 with complete cessation of his PPI.

* manuscript in preparation
† Neuromodulating drugs such as amitriptyline can be utilized