Restech’s pH system was the highlight of new research presented by Dr. Ezra Teitelbaum at the 2017 American College of Surgeons’session on Novel Endoscopic and Minimally Invasive Techniques for Esophageal Dysmotility and Reflux Disease. Dr. Teitelbaum (Assistant Professor of Surgery and Medical Education at Northwestern University) collaborated with Dr. Steven DeMeester (President and Executive Director of the Foundation for Research and Education in Esophageal and Foregut Disorders) on a study comparing the results of different pH monitoring tests in patients off antisecretory medications. 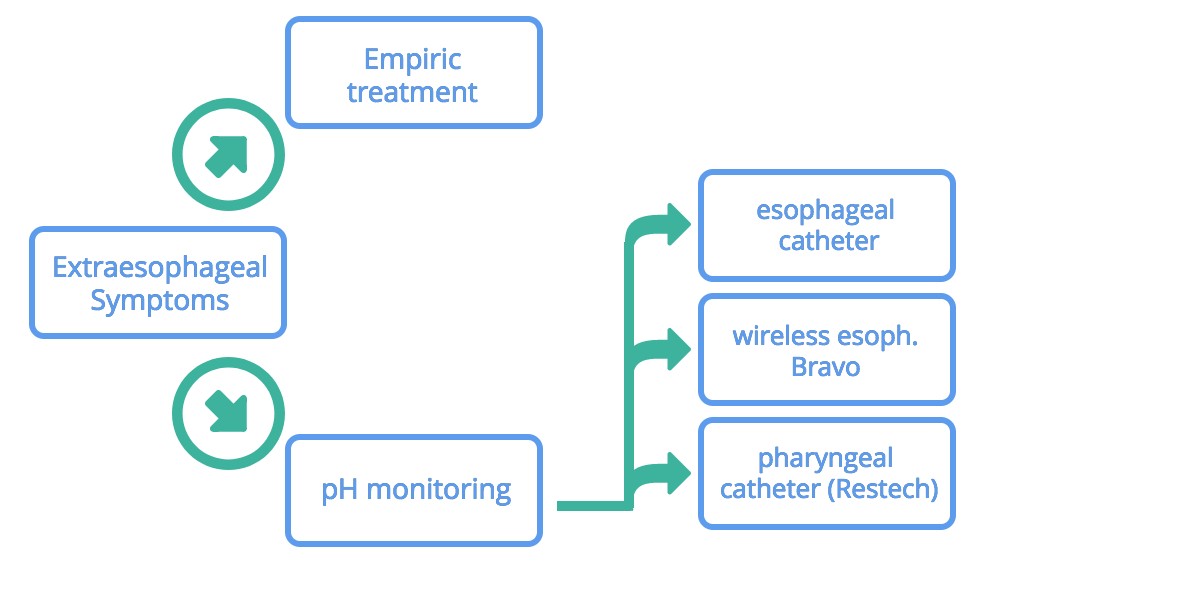 THE VALUE OF pH MONITORING

The diagnosis of extraesophageal reflux can be quite complex because the symptoms are nonspecific. Physicians typically approach the diagnostic process by placing patients on empiric treatment with PPIs or performing pH monitoring.

pH monitoring helps to establish a definitive diagnosis, from which the physician can design a personalized treatment plan through dosing and timing medication, lifestyle modifications, and/or surgical intervention. Follow-up pH studies can be performed to assess the patient’s response to the prescribed therapy.

With all the different options available, how does one determine which method of pH monitoring should be used to diagnose extraesophageal symptoms?

However, can we use an esophageal system as a proxy for what happens in the pharynx?

Patients in this study received either an esophageal catheter or Bravo test. The authors analyzed the two groups assuming that they were similar cohorts, but to their surprise found “the differences are striking. [In] the patients who underwent a Bravo, 71% had abnormal tests or evidence of GERD. Of the patients who had [esophageal] catheter studies, only 13% were abnormal.”

This low agreement suggests esophageal catheter pH monitoring produces a high number of false negatives and may be less sensitive in patients with extraesophageal symptoms.

Finally, Bravo and Restech were studied simultaneously in patients with extraesophageal symptoms. The study found a 94% agreement between abnormal and normal studies in the two pH systems. The one divergent patient between the two devices demonstrated significant only on the second day of their Bravo test, with Restech tests limited to 24 hours during this study.

Restech was more comfortable and easier to use than other pH systems. This is because of Restech’s simple visual placement, whereas others require invasive manometry or endoscopy.

With greater patient comfort, minimally invasive placement in-office, and excellent specificity/sensitivity, Restech pharyngeal pH monitoring is suggested as a first line test for use in patients with extraesophageal symptoms.

WHY IS AN OBJECTIVE EVALUATION OF REFLUX SO IMPORTANT?

The value of pH monitoring in obtaining an objective diagnosis for extraesophageal symptoms makes it a crucial tool for identifying the cause of these symptoms. However, not all pH devices yield the same measure of specificity and sensitivity. Esophageal catheter pH monitoring presented with low sensitivity in patients with extraesophageal symptoms. This study found high agreement between simultaneous Restech and Bravo measurements, with significantly better sensitivity of 93% and a negative predictive value of 92%.

Teitelbaum recommends Restech or Bravo to test patients presenting with extraesophageal symptoms, but highlights that the Restech test may be an easier initial evaluation of reflux.

IS REFLUX THE CAUSE OF EXTRAESOPHAGEAL SYMPTOMS?
USE EVIDENCE-BASED TESTING TO FIND OUT.

If you’d like to learn more about Restech, we are happy to visit your office anytime!