Heartburn and regurgitation are easily identifiable symptoms of gastroesophageal reflux disease (GERD) and tend to be easier to treat with PPI therapy. However, symptoms of laryngopharyngeal reflux (LPR) or atypical reflux have become very prevalent in the population since they are difficult to spot and are often unresponsive to PPI therapy.

1. Their symptoms aren’t caused by reflux.

Common chronic conditions like cough, throat clearing, and laryngeal erythema are examples of LPR symptoms. However, these symptoms can also result from several other etiologies.1

A systematic review of six randomized, controlled studies reveals that the majority of LPR symptoms improved similarly in the PPI and control groups.2 This data demonstrates that empiric PPI treatment of suspected LPR is not superior to treatment by placebo.

A study led by Jonathan Waxman, MD at the University of Illinois at Chicago, tested patients pre- and post-treatment after at least 4 weeks of PPI therapy. Only 39.5% of patients with positive RYAN Scores achieved both pH and symptom normalization while on PPIs. The remaining 60.5% of patients had persistent positive RYAN Scores with no pH normalization when retested on medication.3 (The RYAN Score was created by Dr. Tom DeMeester with high specificity for severe reflux patients using thresholds of pH 5.5 for upright and pH 5.0 for supine positions.) 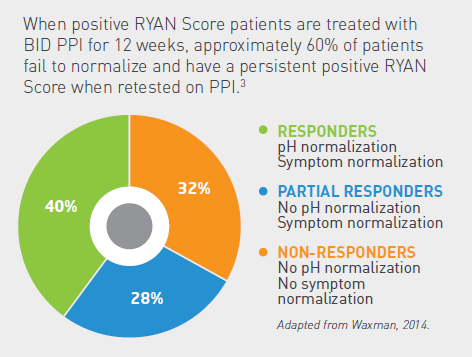 Only significant improvement (not normalization) of the upright RYAN Score was necessary for symptom normalization. This further illustrates why symptoms are unreliable in the diagnosis of LPR. Acid exposure in the larynx in the absence of symptoms may lead to detrimental damage in sensitive epithelial tissue.

The chart above illustrates that symptom normalization while on PPIs does not correlate with a healthy patient. Testing on therapy at 8-12 weeks will either confirm pH normalization or identify patients who require escalated therapy or surgical intervention.

… AND … download a copy of “Atypical Reflux: An Ever-Present Enigma in the Physician’s Office” for a concise overview of the current literature on laryngopharyngeal reflux, PPI response, and objective testing.